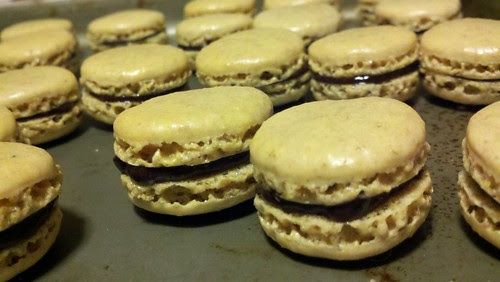 These were made from golden flaxseed meal.

I had some beginners luck with my last two posts, basically I got lucky and then failed a good 3 or four more times. I was frustrated, the captain was frustrated, and I've eaten so many maca wrongs that I haven't stepped on the scale in a week!
However today I dragged the captain to target and got a cheapo food scale, I also went to henrys for almond meal, but it was $11, so I gave up and bought flaxseed meal for about a quarter of the price. I used a recipe from not so humble pie and had fantastic results. So much so that I ran out and braved trader joes on a sunday evening to get more almonds and egg whites in a carton. Right now I'm making almond ones in tiffany blue, well as close as I'm going to get to tiffany blue.
The only modification I made in ms. humble's recipe is I left out the powdered egg white and added a pinch of cream of tartar. I have to say that watching macarons cook is like watching shrinky dinks curl up and shrink!
I also made some fleur de sel caramel, which I burned slightly, but that just gave it a richer taste ;)
If I'm feeling kicky tomorrow, I will remake my peanut macarons which failed this am and fill them with the caramel.
My plan is to bring those to the crop as my interpretation of the cracker jacks that Holly and Paul find the ring in, in Breakfast at Tiffany's.
Posted by RollerScrapper at 9:04 PM

HAHAHA. Maca wrongs. You are clever. =)

I'm not that clever, I saw that play on words at a couple of blogs. The best part is that flaxseed macarons with dark chocolate are healthy with omega 3s and anti oxidants, especially if consumed with red wine!

BTW, I was going to comment on how much "Maca wrongs" made me laugh but another commenter beat me to it! :) I've never known anyone to make macaroons themselves before.. your skillz are sooo impressive!

Thanks! I will have to make some flaxseed ones when you visit :)

Thanks for stopping by! I am a lover of all things crafty, especially scrapping, crocheting, and baking. One of my other favorite pastimes is rollerskating. Rollerscrapper was born from my love of scrapbooking and skating, but if you stop by you might find a favorite recipe, pattern, something I just finished making, a rollerskate sighting or something else I wanted to share. 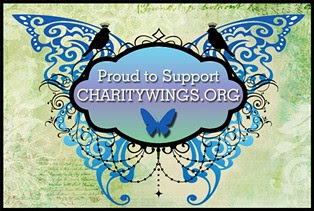